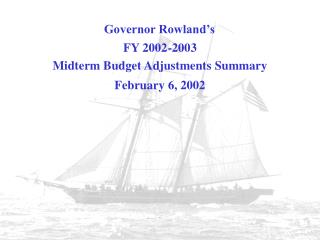 Briefing to Standing Committee on Appropriations on s43 and s30(2) of the PFMA - . components of an adjustments budget.

Looking towards the Next Budget Conversation BIA Policy Committee 12-08-09 - 2. intent to spend: change in general fund

FY 2009-11 Presentation of Governor Perdue’s Recommended Budget Prepared by: The Office of State Budget and - Arch 17,