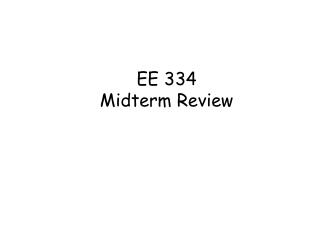 EE 334 Midterm Review. Diode: Why we need to understand diode?. The base emitter junction of the BJT behaves as a forward bias diode in amplifying applications. The behavior of the diode when reverse bias is the key to the fabrication of the integrated circuits.

7 th Gr. Quarter 3 Midterm Review - . these are test questions!!! . review game. pay attention!!! write them down if you

Midterm Review - . chapters 1-6. vocabulary. 1. a question-and-answer pattern in which a group responds to a leader. 2. a

Lecture 12: Midterm Review - . 10 october 2013. key points. scripture what is it how to interpret it apostolic succession

Class Seven – Part One: Midterm Review Classes One to Six - . last time we spoke about: corporations - 1. types of