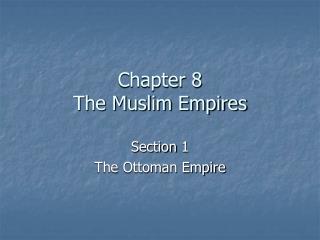 Chapter 8 The Muslim Empires. Section 1 The Ottoman Empire. Rise of the Ottoman Turks. The Ottoman dynasty began in the late 13 th century when Turks under leader Osman were given land in the NW corner of the Anatolian Peninsula by the Seljuk Turks in return for help fighting the Mongols.

Resurgence of Muslim Empires - . chapter 21. i. introduction. after the fall of baghdad, islamic power declined