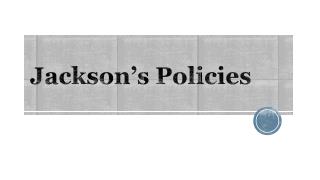 Jackson’s Policies. Secede. To withdraw (in our case it means to withdraw from the Union, or United States). Assimilate. To absorb into a culture. Indian Removal Act. 1830 law that called for the government to negotiate treaties requiring Native Americans to relocate west. Trail of Tears. 13.3 The Age of Jackson - . main idea andrew jackson’s election in 1828 brought a new era of popular democracy. why it

MICHAEL JACKSON - . his family the jackson five h is solo career h is death my opinion. his family. michael joseph

The Age of Jackson - . andrew jackson’s policies speak for the common people, but violate the rights of native

KY Policies - . march dish. scn policies. the purpose of these policies is to get a better understanding of processes in

All About Me - . jackson. the story behind my name. my mom and dad made a list each crossed off the names they didn’t

The Age of Jackson - . chapter 7 section 3. i expanding democracy changes politics a. tension between adams &amp;