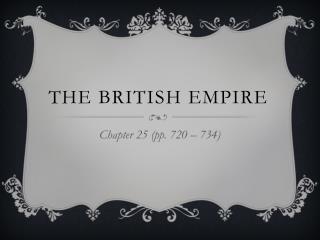 The British Empire. Chapter 25 (pp. 720 – 734). introduction. During the 18 th and 19 th centuries, the British built an empire that would grow to eventually encompass 1/3 of the world’s landmass At the same time, Spanish and Portuguese power declined The Victorian Age - . 1837-1901. the victorian age questions to keep in mind. how were britain and the british empire

The Rolling Stones - . overview: the british are coming. many british rock stars attained popularity in their own country