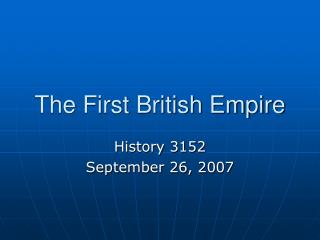 The First British Empire. History 3152 September 26, 2007. Population of London. London: more populated than other British cities and most European cities Grew steadily through the course of the long eighteenth century 1700: over ½ million 1800: 1 million 1850s: over 2 million

The ‘second’ British empire - . mark knights. what were the characteristics of this ‘second

The Empire Writes Back - . an exploration of post-colonial literature with prof. jim kohn of the fromm institute.

British Conquest of India - . the british gained control of india in the 18 th and 19 th centuries before british control

How did the British take control of India? - . l/o – to identify the reasons why the british took control of india.

The change of empire - . british rule. how did the population change at the beginning of british rule?. canadiens

The Province of Quebec in the British Empire - . 1764 – 1791. the concessions. very few british immigrants came to

Severing the Bonds of Empire - . major questions. what were the causes of the american revolution? how and why did

Chapter 16 - . imperialism part 1. “the sun never set on the british empire.” what did that mean?. the sun was always