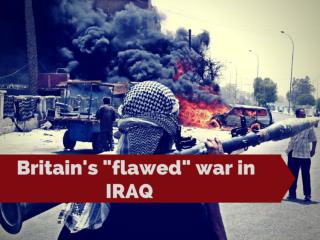 The long-awaited Chilcot inquiry criticizes Tony Blair and his government for joining the U.S.-led invasion without a satisfactory legal basis or proper planning. War In IRAQ - . jeff waterhouse. costs of war. before the war the pentagon put out estimates that the war would cost

War in Iraq - . by: jon laura. http://cryptome.quintessenz.at/mirror/memorial-day-14.jpg. up to date death and wounded

WAR In IRAQ - . “just-war” theory. the iraq war is debatably the most controversial war to ever take place. most

War in Iraq - . tanner lagace . consequences of the war. since the beginning of the war there have been 4439 american

War in Iraq - . (warning…may be disturbing). by: katelyn and daniel. introduction. how the war

WAR IN IRAQ - . the peoples shoes that have been killed collected in the streets and a bunch of empty cig packs. u.s.

War in Iraq - . by: katlyn brown. no end in sight - response. consequences of invading

War in Iraq - . kayla riccio. in the beginning. after 9/11, bush admin. was blaming osama bin laden and declared a war on

WAR IN IRAQ - . maria demarco. casualties in afghanistan:. death toll is at least 753,399 (includes both sides of the

Iraq War - . by josh culora. videos of the iraq war.

Iraq War - . just war or a war of injustice?. what makes a war just?. principles: just cause legitimate authority