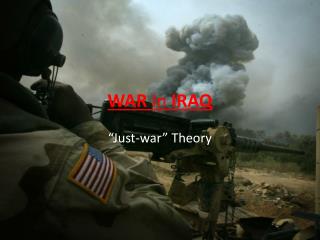 WAR In IRAQ. “Just-war” Theory. The Iraq war is debatably the most controversial war to ever take place. Most people question its morals, its legality, and if it was the just action to make. The main issue in Iraq is if it was just to invade Iraq without solid proof of nuclear weapons.

Financial Bubble and Crisis ,and Financial Engineering Innovation - . recent reminders (1). iraq was where once a

Akkadian Society - . introduction. the akkadian empire(2340-2200b.c.e.) it was located on the western bank of the

The Euphrates-Tigris River Basin - . by ziad al awar. description of the euphrates-tigris river basin. the

UNCLASSIFIED/For Official Use Only - . james madison university, 27 apr 07. ten myths of the war in iraq. brigadier