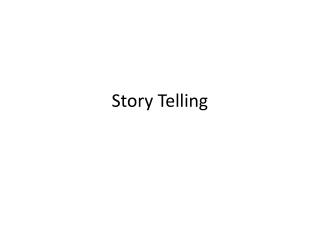 Story Telling . In writing for purpose Carmen asked us to write an opinion piece on a story that was currently in the news. I saw a story about a 13 year old Indian girl who had been raped by three men and then they set her alight and she died. . The actual opinion piece. Story Telling - . make reading fun!. what was your favorite story as a child?. why?. miss godbey’s childhood favorites.

Telling Your Story - Introduction. who am i?why am i here?what are we doing?. the basics. what is the relative value of

Telling Our Story - Dawson, 11 life-threatening heart defect i wish to go to hawaii. darrien, 7 i wish to be a police

TELLING A STORY - . how to improve your writing. telling a story. a useful skill in english is to be able to tell a