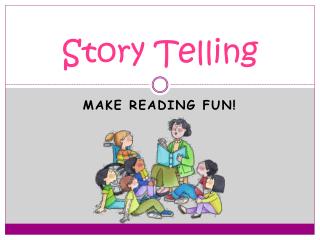 Story Telling. Make Reading Fun!. What was your favorite story as a child?. Why?. Miss Godbey’s Childhood Favorites. Effective Story Telling Techniques. Most people know that stories which hold a child’s attention get retold over and over again. The following are effective techniques: Story Telling - . in writing for purpose carmen asked us to write an opinion piece on a story that was currently in the

Telling Your Story - Introduction. who am i?why am i here?what are we doing?. the basics. what is the relative value of

Telling Our Story - Dawson, 11 life-threatening heart defect i wish to go to hawaii. darrien, 7 i wish to be a police

TELLING A STORY - . how to improve your writing. telling a story. a useful skill in english is to be able to tell a