The Mystery of the Flashing Lights - PowerPoint PPT Presentation 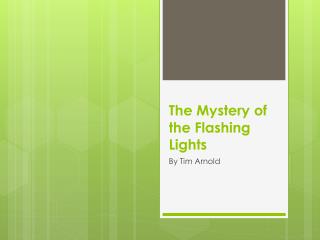 The Mystery of the Flashing Lights

The Mystery of the Flashing Lights. By Tim Arnold. s equence. N. The following of one thing after another; the order in which something follows When baking a cake, it is important to following the sequence of the recipe. If you don’t you could end up with a disaster. adjacent.

The Mystery of the Flashing Lights

The Red Signal Prohibits Any Traffic From Proceeding. - When was the last time you took time to notice the traffic

UFOs - . by silviya koleva. 1. the definition of ufo. any real or apparent flying object which cannot be identified by

Pro plus The alarm clock that shows you when the mobile rings - Alarm clock pro plus | introduction. pro plus the alarm

Keeping pets safe and sound around fireworks - . fireworks can be very scary for pets. bonfire night is an exciting time

Epilepsy - . jackson wolkins health 7 period 1 february 2013. what is epilepsy?. epilepsy is a condition in the brain

Semester one exam review - . nouns. definition. a noun is a word that names a person , a place, a thing, or an idea. .

Epilepsy - . alina chow. what is epilepsy?. epilepsy is a disorder that causes seizures because of electrical surges sent

Seizures - . presentation by delin wang samir patel. introduction. a seizure is a paroxysmal event due to abnormal,

PTAN9 Series washer Service Tips - . the issue listed here are for the most common failures, they are not the only