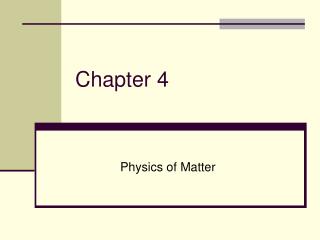 Chapter 4. Physics of Matter. Matter: Phases, Forms & Forces. We classify matter into four categories: Solid: rigid; retain its shape unless distorted by a force. Liquid: flows readily; conforms to the shape of a container; has a well-defined boundary; has higher densities than gases.