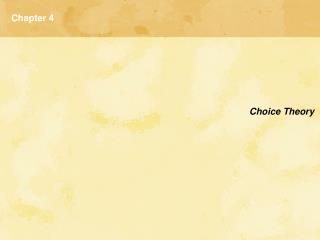 Chapter 4. Choice Theory. The Development of Rational Choice Theory. Roots in the classical school of criminology developed by Cesare Beccaria. Beccaria called for fair and certain punishment to deter crime Chapter 4 - . lesson 1 the voyages of columbus. lesson 1- objectives. explain the purpose of columbus’s voyages to the