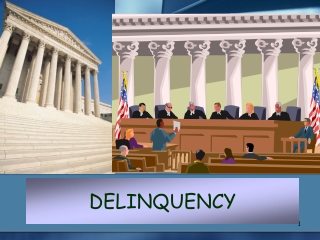 DELINQUENCY. Introduction. Developmental theories are dynamic in that they emphasize that individuals develop along different pathways, and as they develop factors that were previously meaningful to them no longer are, and factors that previously meant little to them suddenly become meaningful. Juvenile Delinquency - . week 3 this week we will be talking about developmental views of delinquency (chapter 5) and

Juvenile Delinquency - . mrs. lauterhahn. an act by a juvenile under the age of 18 that if committed by an adult would

Crime and Delinquency - . biology and

Commitment through Delinquency - . pulling together two worlds…. there is a difference between commitment after being

Schools and delinquency - . schools. children more at risk if they are truant or have dropped out of school more at risk

JUVENILE DELINQUENCY GUIDELINES - . building on the past to design future courts of excellence. juvenile justice