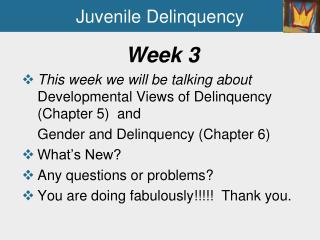 Gangs and Delinquency - . chapter objectives. after completing this chapter, you should be able to:. explain the

What Works/ What Doesn’t in Changing Behaviors - . the principles of effective interventions. presented by: jennifer a.

“The Challenges of Family Reunification with the Juvenile Sex Offender: An Ecosystemic Approach”