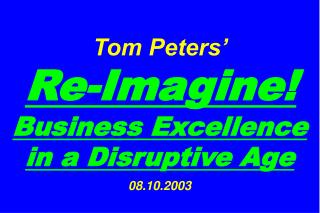 Tom Peters’ Re-Imagine! Business Excellence in a Disruptive Age 08.10.2003. Slides at … tompeters.com. It is the foremost task—and responsibility— of our generation to re-imagine our enterprises, private and public .—from the Foreword, Re-imagine. The 100 Leading Global Fintech Innovators 2015 - We are pleased to present the second annual ‘fintech 100’, the best