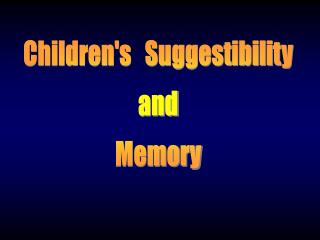 Memory and the power of suggestion - . objectives . describe how valid eye witness testimony is analyze the power of

Suggestibility and anxiety as predictors of performance in children undergoing cross-examination - . caroline bettenay,

1. Information contagion can be, directly or indirectly, dependent on : suggestibility; anxiety; patient’s personal

CHILDREN’S VIEWS ON THE IMPLEMENTATION OF THE CONVENTION ON THE RIGHTS OF THE CHILD (CRC). THE CASE OF CHILDREN IN

Do children make good witnesses? - . contrasting views of children as witnesses:. whipple (1910): children are the

The Children of God/The Family - . by: robin ross &amp; brittany salak. founder: david berg. berg was born in 1919 in