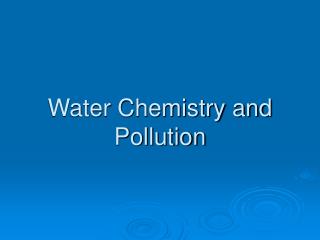 Water Chemistry and Pollution. Why we measure water quality?. When a body of water is overfed with nutrients it can create massive algal blooms which causes very low levels of DO killing off many aquatic organisms. www.thebutlerchain.com/introduction.htm. Pfiesteria.

Chemistry Jeopardy Review!!! - . final jeopardy. introduction to chemistry 100 this is the definition of chemistry.