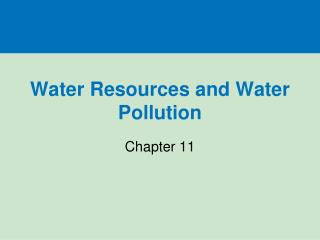 Water Resources and Water Pollution. Chapter 11. Section 11-1. WILL WE HAVE ENOUGH USABLE WATER? . Where is the water?. Freshwater is an irreplaceable resource that we are managing poorly. A person could survive for only a few days without water. Functions or Services of Water .