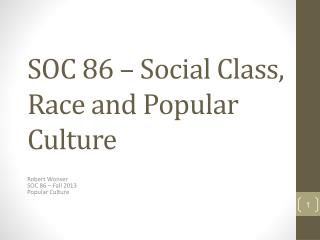 SOC 86 – Social Class, Race and Popular Culture. Robert Wonser SOC 86 – Fall 2013 Popular Culture. Highbrow and Lowbrow. “highbrow” and ”lowbrow” Phrenological throwback when it was presumed brow size (height of forehead) was thought to be a marker of intelligence SOCIAL CLASS and STRATIFICATION - . stratification system: rank some kinds of people as more deserving than others, or