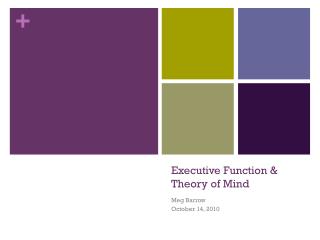 Executive Functions in the Classroom - . challenges for the modern age. the pace of modern technology brings with it many

What Does It All Mean? ADHD, Executive Functioning, Causes and Management - . russell barkley, ph.d. clinical professor

Executive Function - . computational cognitive neuroscience randall o’reilly. who is in charge of your brain??.

Executive Functioning - . the cookie problem (from richard guare , ph.d.). problem to be solved: who wore which color?

Executive Function Disorder - . day two. in every person, even in such as appear most reckless, there is an inherent

THE Marshmallow test: executive functioning in children and teens - . with educational interventions presented by david