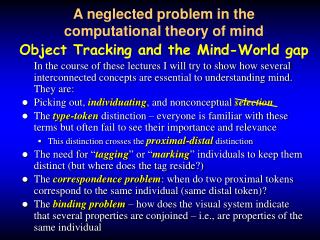 A neglected problem in the computational theory of mind Object Tracking and the Mind-World gap. In the course of these lectures I will try to show how several interconnected concepts are essential to understanding mind. They are: Picking out, individuating , and nonconceptual selection Scientific realism - . varieties of (the problem of) realism. ontological: is there a mind-independent world?

The eye and the mind - . it appears that our eye determines an image: we merely open our eye, and there it is!. the eye

The Mind/Brain Identity Theory - . by: aman , cherisse a nd gummy. what is the mind/brain i dentity theory?. definition:

Mind and Body I - . bodies and ghosts, qualia, and mind-brain identity. brie gertler. a naturalistic dualist. the special

Chapter 10: What am I? - . introduction. what does the word i refer to? mind-body problem – what are the mind and body,

The Mind - . the brain is a very powerful thing. human beings use their brains, or minds, to build skyscrapers,. and make

MIND MAPS - . by ms annabelle vella. what is a mind map. a  mind map  is a  diagram  used to visually outline