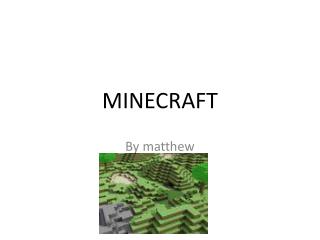 MINECRAFT. By matthew. The game. minecraft - . by: jade garrett. some mobs. amazing builds. so many adventures . with mods. your adventure

Minecraft 101 - . monsters. monsters. if you are not careful, monsters could get you. this presentation is to teach you