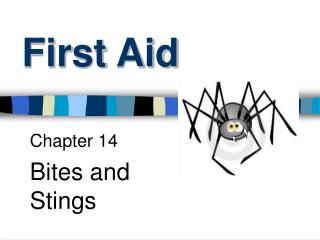 First Aid. Chapter 14 Bites and Stings. Animal Bites. 1 In every 2 Americans will be bitten at some point buy an animal. Dogs are responsible for about 80% of all animal bites. Rabies. Virus found in warm blooded animals Spreads though saliva (biting or licking). Rabies. first aid - First aid. first aid is an emergency medical treatment for somebody who is ill or injured,given before more

First Aid - . chad peters, ms, atc. recognizing and responding to an emergency. whats out of the ordinary sights,

FIRST AID - The faculty of medicine.... has determined that all medical students should acquire training in first aid and

First Aid - . duties of a first aider . course objective. “to ensure you leave here with an awareness of the basics of