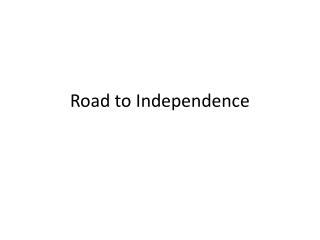 Road to Independence. Revenue. Incoming money. Writ of Assistance. a legal document that enabled officers to search homes and warehouses for goods that might be smuggled. Sugar Act. lowered the tax on molasses imported by colonists. Stamp Act.

Vietnam’s Road to Independence - . essential question: how did nationalism lead to independence in vietnam?. let’s