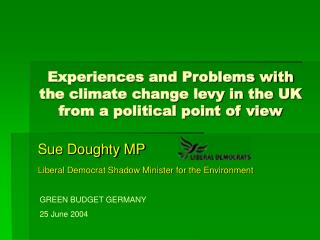 Experiences and Problems with the climate change levy in the UK from a political point of view. Sue Doughty MP Liberal Democrat Shadow Minister for the Environment. GREEN BUDGET GERMANY 25 June 2004. Background to Climate Change Levy.

Air &amp; Air Pollution - . see what you know. what is in the air? what is the difference between global warming and