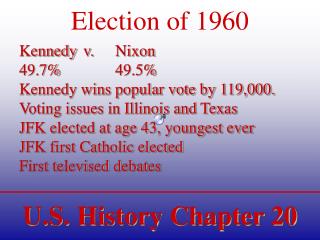 The Kennedy Years - . how does america change during “camelot”?. the television election. eisenhower warns us public

1960’s Leaders - . john f. kennedy – president of the u.s. was a representative then a senator from massachusetts.

An Affluent Society, 1953-1960 - . the golden age. the changing society. the new consumer culture. the interstate highway

John F. Kennedy and the Election of 1960 - . ssush21 the student will explain the impact of technological development and FASHION IN THE 1960’S - . times of change. clothing in the 1960’s mirrored the prevailing attitudes of the times; the