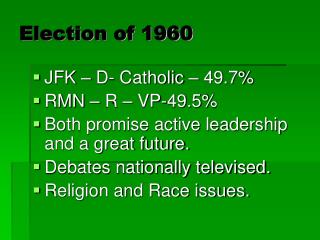 The New Frontier and the Great Society - . chapter 20. kennedy and the cold war. the presidential election of 1960.

The Election of 1960 - . eisenhower’s popularity began to go down towards the end of the 1950’s ussr’s launch of

Splash Screen - . the new frontier what social issues did the kennedy administration address?. chapter intro 1. the

The Kennedy Years - . how does america change during “camelot”?. the television election. eisenhower warns us public

The Politics of the 1960s - . the election of 1960: jfk defeats richard nixon. first election where television had