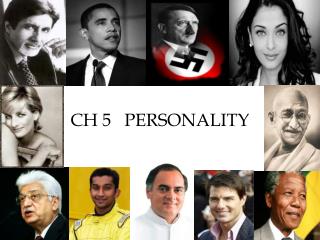 CH 5 PERSONALITY. PERSONALITY. According to Fred Luthans personality is defined as “ how people affect others and how they understand and view themselves as well as their pattern of inner and outer measurable traits and the person- situation intervention”. Ch 3 Personality - . personality: how people see you.. *think, behave, feel, act. self-image: a picture you have of who

Ch 13 Personality - . personality. unique way in which each individual thinks, acts, and feels throughout life it is not

CH 10 - Personality - . partner review game. :25. according to freud, which part of the mind acts as a person’s

Ch. 10 - Personality Psychology - . what is personality?. an individual’s characteristic pattern of thinking, feeling,

Ch. 5 - Subject verb agreement . ch. 5. agreement of subject and verb. a verb should agree in number with its subject.

CH 5 - . project scope and human resources planning. objectives. acquire a general understanding of the parts of the

Ch # 5 - . atoms, molecule, formulas, subatomic particles. atoms. an atom is the smallest particle of an element that can