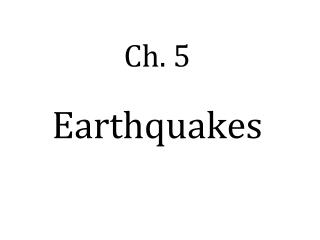 Ch. 5. Earthquakes. I. Over millions of years, 3 types of stress change the shape & volume of rock. A. Tension – pulls or stretches crust 1. occurs where plates are moving apart. B. Compression – squeezes crust together 1. plates push against each other until