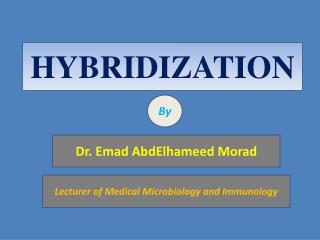 HYBRIDIZATION. By. Dr. Emad AbdElhameed Morad. Lecturer of Medical Microbiology and Immunology. Denaturation or melting: Separation of the two DNA strands from each other. Melting could be done by either: Heat (90-100 °c) Alkaline pH Low salt concentration

Symmetry and Group Theory - . the symmetry properties of molecules and how they can be used to predict vibrational

Introduction - . the methods depend upon, and were developed from, an understanding of the properties of biological