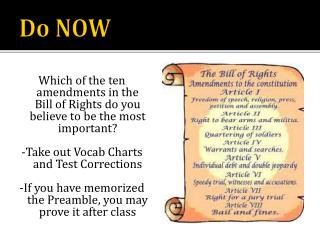 Do NOW. Which of the ten amendments in the Bill of Rights do you believe to be the most important? -Take out Vocab Charts and Test Corrections -If you have memorized the Preamble, you may prove it after class. Bill of Rights Quiz (This Thursday).