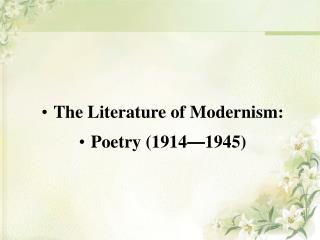 The Literature of Modernism: Poetry (1914 — 1945). Modernism. 1. Definition : The term modernism refers to the radical shift in aesthetic and cultural sensibilities evident in the art and literature of the post World-War-I period. experimental

Unit 1 - . “genre study” and oedipus. genre. a category of literature. the main literary genres are fiction,

Grasping God’s Word - . old testament—poetry chapter 20. poetry in the bible. “poetry is the language of the

Teaching &amp; Performing Poetry - Professional development activity for “enhancing the interface between the