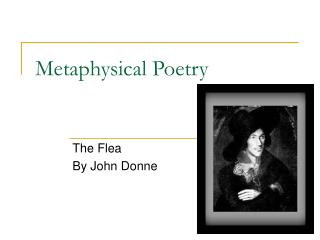 The Characteristics of Metaphysical Poetry - . metaphysical

METAPHYSICAL POETRY an introduction - The name as literary slang. the term metaphysical poets' came into being long after

Poetry - . what makes poetry different?. poetry booklet. creative project by the end of this poetry unit, students will