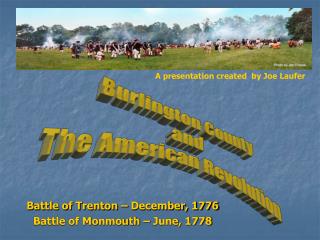 A presentation created by Joe Laufer. Burlington County and The American Revolution. Battle of Trenton – December, 1776 Battle of Monmouth – June, 1778. AMERICAN REVOLUTION 1775-1783 Begins with the Battles of Lexington and Concord near Boston in April, 1775

Spiritual Warfare 101 - . winning the unseen battle. what do you think?. the devil is: *a mythical being *a fallen angel

Silencing the Censors: Recent Developments in the Battle for Free Expression in Game Development - By lawrence g.