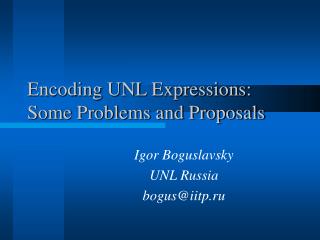 Encoding UNL Expressions: Some Problems and Proposals. Igor Boguslavsky UNL Russia bogus@iitp.ru. Generals. UNL: an interlingua or not? No ambiguity UNL vs. natural language “at least as powerful as any NL”? semantics vs. KB Correct UNL vs. adequate UNL. Adequacy conditions. Algebraic Expressions - . lesson 5-1. evaluate an algebraic expression. the branch of mathematics that involve

Regular Expressions and Finite State Automata - . with thanks to steve rowe at cnlp. introduction. regular expressions

Memory - P. 269-276. memory. the persistence of learning over time through the storage and retrieval of information. the