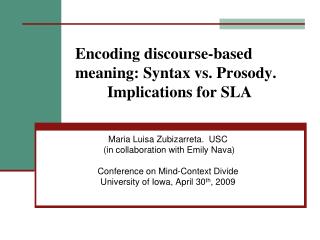 Do Now Title: Shades of Meaning and Multiple Meaning Words - . please take out a sheet of paper and label it like the

Encoding and Retrieval from Long-Term Memory - . learning objectives. the nature of long-term memory encoding: how

The Meaning of Passover - . grace and shalom to all. my name is gavin finley and in this video we shall be taking a