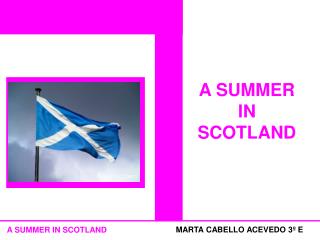 A SUMMER IN SCOTLAND

A SUMMER IN SCOTLAND. SCOTLAND’S MAP. we will tour around Scotland will see some beautiful sites to visit mui, customs, gastronomy. DAY 1: EDINBURGH.

A SUMMER IN SCOTLAND

All About Britain (Primary One) - . where is britain?. britain. scotland. england. wales. the british flag. weather in

The Hospital Plan for Scotland 1962 - . why this topic. offers an insight to an interesting area of economic and social

Scotland – Basic Facts - . a part of the uk to the north of england (but has its own parliament , legal system ,

Let’s Learn About Scotland - . www.flags.net/scot.htm. where is scotland?. map of scotland. staff.psy.gla.ac.uk/