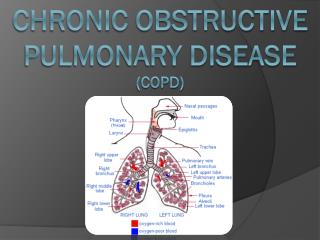 Chronic obstructive pulmonary disease (COPD). What is COPD?. COPD is the fourth most common cause of death in the USA . Progressive Disease (Worsens Over time) Incurable Smoking is the leading Cause Chronic Obstructive Pulmonary Disease - . what is copd?. chronic obstructive pulmonary disease (copd) is one of the most

Chronic Obstructive Pulmonary Disease - . what will we cover?. diagnosis management of stable copd management of