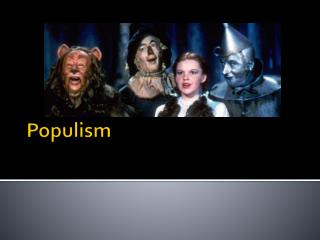 Populism. Gold Standard and Silver Standard. Gold standard meant that the gov’t would use gold as the basis for the country’s currency With the Coinage Act of 1873, the government would now only produce gold coins “Crime of 1873” by those in favor of minting silver dollars

Populism &amp; the Election of 1896 - . what were some of the major problems facing farmers during the gilded age ??.

The Rise &amp; Fall of Populism - . populist party platform. formed in 1892 lift the burden of debt from farmers

Populism &amp; the Election of 1896 - On a separate sheet of paper analyze the political cartoon in at least 5

Populism - . populism refers to the political movement (and the populist party) of mostly farmers who demanded government

Farmers and Populism - . 16.3. objectives. analyze the problems farmers faced and the groups they formed to address them.

POPULISM POLITICAL CARTOONS - . all cartoons and text from:

The Rise of Populism - . populism. finally, people (especially farmers) are getting fed up with a government that they

Western Settlement and the Rise and Fall of Populism - . mr. daniel lazar. important themes in this lecture. jeffersonian

Populism and The Wizard of Oz - . background