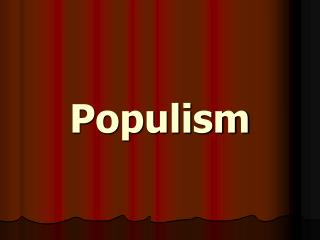 Populism. Declining Profits. Thanks to new technologies, farmers had opened up the Great Plains and were producing a much larger supply of grain Grain supply ↑ = Grain prices ↓ Farmers were earning LESS. Rising Costs.

Populism &amp; the Election of 1896 - . what were some of the major problems facing farmers during the gilded age ??.

The Rise &amp; Fall of Populism - . populist party platform. formed in 1892 lift the burden of debt from farmers

Populism &amp; the Election of 1896 - On a separate sheet of paper analyze the political cartoon in at least 5

Populism - . populism refers to the political movement (and the populist party) of mostly farmers who demanded government

Farmers and Populism - . 16.3. objectives. analyze the problems farmers faced and the groups they formed to address them.

POPULISM POLITICAL CARTOONS - . all cartoons and text from:

The Rise of Populism - . populism. finally, people (especially farmers) are getting fed up with a government that they

Western Settlement and the Rise and Fall of Populism - . mr. daniel lazar. important themes in this lecture. jeffersonian

Populism and The Wizard of Oz - . background