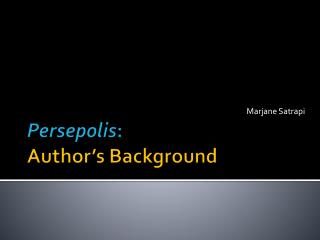 Background on the Iranian Revolution - . for reading persepolis. when and how did the shah of iran (mohammad reza

In the novel, Persepolis , who is Satrapi criticizing? - . a– iranian people b– iraqi soldiers c– iranian

Copy This: PERSEPOLIS CHAPTER 6 The Party (p. 40) (The Revolution) - . copy the yellow text on the following slides *

Poetry - An in-depth analysis. poetry. simile. comparison using “like” or “as” can be extended over multiple

This is the title - . thrust area: delete all of this, keep one of the following: new design paradigms and processes