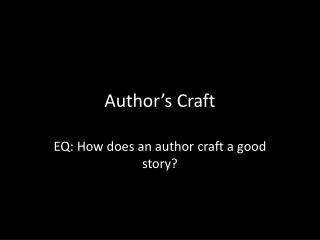 Author’s Craft. EQ: How does an author craft a good story?. Author’s Craft. The specific techniques that an author chooses to communicate an intended message. F or example, the use of figurative language, tone, flashback, foreshadowing, imagery, irony, symbolism, word choice, and dialogue. . Quoting, Paraphrasing, &amp; Summarizing - . objective: students will be able to identify the differences between

Did Moses Author the Pentateuch? - . benedict spinoza (1632-1677). he was a jewish pantheist the laws of nature are

Unit 3 Bards of the Internet - . about the author. about this author philip elmer-dewitt has been covering apple since