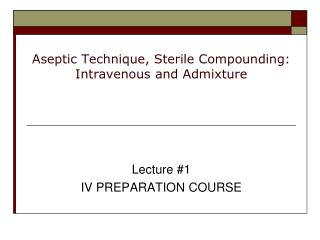 Ch. 10 - Dressing and Bandaging - . 10.1 dressings. requirements : sterile , meaning that any microorganisms and spores

Guidelines to Prevent Central Line-Associated Blood Stream Infections - . why do i need to complete this orientation?.

LEG 5 A - 2. surgical asepsis. all objects used in a sterile field must be sterile.sterile items out of vision or below

Implementation of a Personnel Training and Assessment Program for the Compounding of Sterile Preparations - . philip

INTRAVENOUS Fluids - . presented by muhammad suleman raza. the goal of intravenous fluid administration is to carefully

Aseptic technique and Cleanroom Procedures - . cleanroom is a room that is designed to be relatively free of airborne

What are Intravenous fluids ? - . are large volume injections intended to be administered by intravenous infusion.

Development of AT modules - . procedures the principles of aseptic technique insertion of peripheral vascular catheter