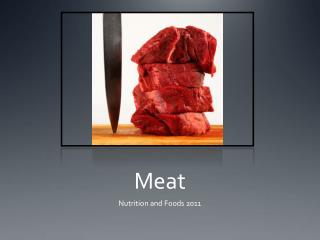 Animal Selection and Evaluation - . carcass evaluation. why evaluate carcasses? . a complete understanding of the factors

The paleo diet - Is a diet that mimics the eating habits of our caveman ancestors. they ate lots of meat, fat and

Leviticus - . law of the priests- torah kohanim 5 classes of sacrifice or regulation in first 7 chapters. 1.burnt

Soup &amp; Sauce Cookery - . “ the sauce to meat is ceremony; meeting were bare without it. ” -shakespeare. “

The Life of a Garibaldi!! - . by: wendy, mario, ramon, and wilfredo . what is a garibaldi?. a fish gets nervous when

Cooking Merit Badge - . requirements. 1. do the following: a. review with your counselor the injuries that might arise