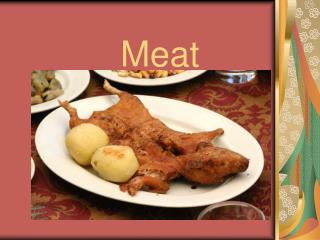 Meat What meats did Indians consume before the Spanish conquest? What was/is the relationship between meat consumption and ethnicity? How did the Spanish react to ‘Indian’ meats like guinea pigs, insects, turkeys and iguanas?

MEAT - . structure. meat is the flesh of animals reared for food. e.g. cows, goats, pigs. meat is composed of bundles of

Meat - . what meats did indians consume before the spanish conquest? what was/is the relationship between meat

Meat - . basics. meat = the edible muscle of animals contains both visible ( marbling )and invisible fat meat is an

Meat - . what do you know about the meat you eat?. nutritional value. protein-has all the essential amino acids fat

Meat! - . meat production and consumption have grown steadily. animals for meat raised in pastures and rangelands

Meat - . today you will learn how to…. list factors affecting the selection of meats describe principles of cooking

Meat and Meat Alternates - Apply the dga messages to the role of meat and meat alternates in a healthy diet. ... the

Meat - . it’s structure and nutritional value. what is meat?. simply defined it’s the flesh of animals used as

Meat - . offa l- a term used to describe the internal organs of animals. such as the liver, kidney and heart. it includes

MEAT - . meat. most families plan meals around meat and then select sides to go along advantages: disadvantages: