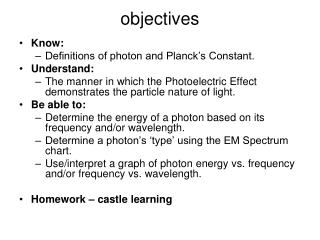 objectives. Know: Definitions of photon and Planck’s Constant. Understand: The manner in which the Photoelectric Effect demonstrates the particle nature of light. Be able to: Determine the energy of a photon based on its frequency and/or wavelength.