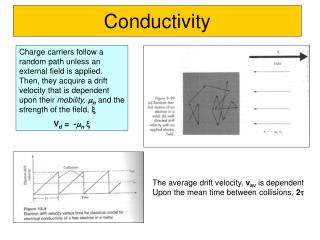 Conductivity. Charge carriers follow a random path unless an external field is applied. Then, they acquire a drift velocity that is dependent upon their mobility, m n and the strength of the field, x V d = - m n x . The average drift velocity, v av is dependent

Ionic Conductivity In A Thermochromic Solid - . objectives: --to synthesize the ionic conductor cu 2 hgi 4. --to observe

Electrical conductivity, EC - . a quick method to measure the salinity of water. ec is approximately one-tenth of the