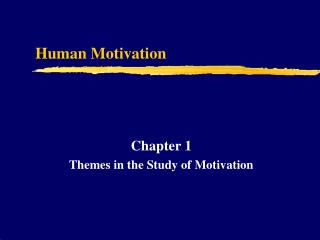 Human Motivation. Chapter 1 Themes in the Study of Motivation. What causes behavior?. Motivation theorists Assume that for every behavior, there is cause Goal is to identify those causes Tend to be eclectic Want to know what instigates behavior Biology, learning, cognition. o. Human Motivation - . chapter 13 the need for control and competence. competence. being able to successfully deal with

Human Motivation - . chapter 12 from curiosity to creativity. curiosity and exploratory behavior. children like to