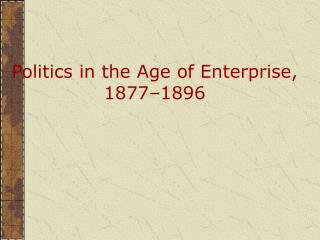 Politics in the Age of Enterprise, 1877–1896. The Politics of the Status Quo, 1877–1893 The National Scene The Ideology of Individualism The Supremacy of the Courts. Political stalemate was the rule for most of the last quarter of the nineteenth century. Goal 3 Reconstruction 1865-1877 - . how did reconstruction impact the social, political, and economic institutions of the

Switching in an Enterprise Network - . introducing routing and switching in the enterprise – chapter 3. objectives.

Reconstruction (1865-1877) - . the time period following the civil war where the us began to rebuild and reunite with the